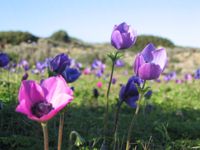 The Cretan endemic plants in the region of Sitia usually grow in high altitudes, in gorges and isolated areas. Some of these plants are extremely rare or in danger of extinction. Most of the endemic plants grow in rock cracks and steep cliffs, where humans and animals cannot reach them.

Its shoot is median, fuzzy, with medium and basal oblongovate leafs and dichotomous stem. The calyx lobes are twice the size of the ovary, and it has tubelike corolla of blue-violet color. It blooms in April-May and grows on rocks and gorges in high and low altitudes. 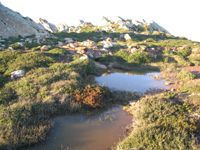 It is the only endemic cyclamen species in Crete. It has tuber at its root, and the leafs are long-petioled, more or less cordate at base. Its white (and sometimes rosy) flowers bloom in March-April. It grows on montane and sub-montane zones, in shady locations.

A biennial plant with a rosette of pinnatelylobed or pinnate leafs, up to 30cm. High and hairless stems, up to 80cm. Flowers blue that bloom from April to May. It grows on rocks and gorges from sealevel to the montane zone.

It is a species that has many varieties, all endemic in Crete. A woody perennial shrub, closely packed at the base, with many short non-flowering stems. Flowering stems up to 20cm high with 2-3 flowers. Pale pink or pink dentate petals 4-8mm and 4-8 epicalyx scales. It grows on rocks in altitudes of 200-1500 meters.

It is an endemic plant of Crete and grows on rocky areas, usually in an altitude of 100 to 1800 meters. It has pubescent or hairy leafs, slender quandrangular reddish stems, and purple corolla. It is boiled in water and used as hot medicinal drink. In eastern Crete it is also known by the name "Antonaida". 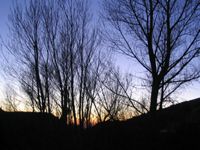 Small endemic shrub of Crete that grows all over the island, on dry, rocky slopes of hills and gorges in the montane and lowland zones. It has impressive reddish flowers in dense hairy racemes that bloom in April.

View "Sitia, The other face of Crete", guide

On the Eastern coasts of Crete the predominant Sun, too strong to be ignored will be revealed to you. The power of the sunlight magnifies the visitor's senses.